My mother never said I love you. She was a doer.

Who stays up around-the-clock, four days, applying hot compresses laced with olive oil to conquer a sports injury? Who scours the heat registers for pennies to buy lentils and beans for dinner since she used the last of the paycheque to pay for a ballet tutu or piano, flute and guitar lessons or sports equipment for four children? Who makes you pay back a loan, used to cover my rent after a car crash, and sends the demand letter certified mail to teach me to save money? My mother who loved us.

The original 1929 tickets that brought my mother, Anna Betnaza, from Poland to Southhampton, England to Canada. My grandmother traveled with three children. The cost in today’s dollars is a little more than $4,000.

Mothers save everything. It was her last gift. The letters, cards and baubles that I sent her, from far flung locations, Cairo-to-Bangkok, assure me that I had been a good daughter. A daughter she shooed away at 17: “There’s nothing for you in a small town,” she told me.

MacGyver says my eyes light up the same way today when I see cake. That’s because it was a huge, once-a-year birthday treat. Maybe because my mother and I have been known to eat a whole cake or pie, sliver-by-sliver. In one day.

But like most children, we didn’t appreciate her enough.

In every photo I see her grit. A gregarious teenager despite disappointment that her parents stopped her formal education at 13. A growing sense of style. An elegant woman at 30. Anna Betnaza, a wife and mother, in her 30s, 40s, 50s and 60s, making the best of difficult years, cooking, cleaning, mothering, yet still determined to mark out her own territory with her garden, her herbs, her remedies and her book, Eat Anna’s Way.

In her 70s, after my father died, she continued to be enthralled with learning. She joined Toastmasters because she had always wanted to be a public speaker.

A Dominion Herbal College colleague of hers said my mother was “the source of delightfully witty comment.” She was funny.

My mother is front left in the photo. A teenager in Alberta’s Peace River country itiching to get out. She was pulled out of school at the end of Grade Eight. Her parents couldn’t see the benefit of educating her. She never became a farm wife.

She lamented often that she was “not the mother type” and that she did not know how to be a grandmother. She married because in the 1950s a woman was a failure without a husband and children and so she followed convention. Her only time.

But she worked hard at marriage and motherhood, she gave it every effort and then some, she was proud of her children but mothering was not part of her soul. Late in life, when people asked her how her kids were doing, she’d say: “They must be doing all right. No one’s asking me for money.” That was high praise from her. And it meant she had done her job.

Organizing the photos my mother saved, I see that, despite the wrinkles and saggy knees, I am virtually unchanged since I was a teeanger. At 33, she had me try on my 13-year-old self’s ballet tutu. It was the same year that I bought a key lime cocktail dress that I wore at 44 to get married and that still fits at 56, six years after sitting behind the wheel of a big truck.

Her theories about food and nutrition and health have stood the test of time. She was very proud that six years into our truck driving lifestyle, relying on a food strategy learned from a lifetime sitting at her table, I am the same size as when I started.

I have looked at everything that she owned. She did not leave jewels or furs or bone china or antique furniture. She wanted me to take the Blue Willow dishes set that she collected from Safeway in the past 20 years. I have her mother’s Blue Willow platter, faded from use since the 1930s. But the dishes made her neighbor friend’s eyes light up. The woman, who spent time with my mother in the rose garden, who answered the call when my mother needed help and sat with her in the hospital until I arrived, and who my mother regularly scolded for not getting “with it” on the computer, now has the dishes proudly displayed in her house. In her china cabinet overlooking my mother’s computer. This new home is the best place for them.

My mother left us knowledge. Some of it delivered, literally, spoonful-by-spoonful. What I am keeping surprises me. She has almost 30 years of journals, filled with notes for her books, recipes, favorite quotes, observations, research on casting her election votes. I discovered many of her clothes fit me. Perfectly. A lavender, high-necked, fitted fleece, a navy-and-white polka dot dress with a fitted bodice, a high-waist and a full skirt to my calves, which I will use traveling in India in February. Her signature black and white, polka-dot, summer dress, sleeveless with a form fitting bodice and knee-length, swing-style skirt that she bought at a thrift store almost 20 years ago. She saved a dress that I bought a few months after my father died in 1994, a wildly extravagant, for her, slate-gray coat dress with brass buttons. It will fit with a little tailoring. 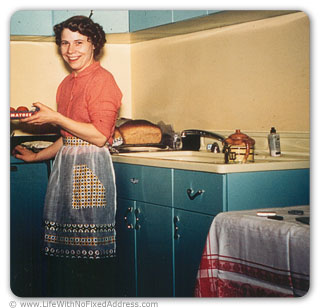 We were a planning a trip to visit her this month so she was stocking the freezer with our favorites. I cry every time I think that I will never again eat food that she has made for me.

Food, glorious food. Nutritious food. “Your mother told me that food is very important to her,” the neighbor said. “She wants only the best of the best.”

And she gave it to us, vegetables and herbs from her garden, fruit bought from the orchard, whole milk and cream directly from the dairy farm and pastured eggs.

My mother and father in 1991. She was working on the final stages of publishing her book Eat Anna’s Way.

My mother delighted in food, in its taste, bitter and sweet, and texture, crunchy and silken. Its fragrance. Her favorite herbs were dill and garlic. And everything fresh. She served us carrots and zucchini with a hint of dirt.

She enjoyed picking the meat off the chicken carcass, sucking the marrow from bones. She, and I, have been known to eat a whole pie or cake, sliver-by-sliver until it’s gone. In one day.

She cooked the entire day, every day, completely from scratch, creating a storm of a mess, and we ate whatever was put in front of us without complaint. Once cooked, mealtimes were a respite for her and us. We sat at the table — “you can always eat” was the only response to the question: Are you hungry? in our house — eating, laughing, eating, talking. It was often the only common ground, where we could lay down sibling arms and declare a truce.

This morning I felt my mother. I knew her message. It’s time to go. To get back to our own lives. It’s what she wants. We have places to see, money to earn, people to meet.

We’ve turned on the email load alert to look for our next freight.