I came prepared to mock it.

Without seeing the network of walkways along the banks of the San Antonio River, one story below the city’s downtown, lushly subtropical, fragrant and guarded by 400-year-old Cypress trees, I dismissed it as a corporate river, expecting an abundance of the typical tourist shops, selling the typical tourist product, fudge. 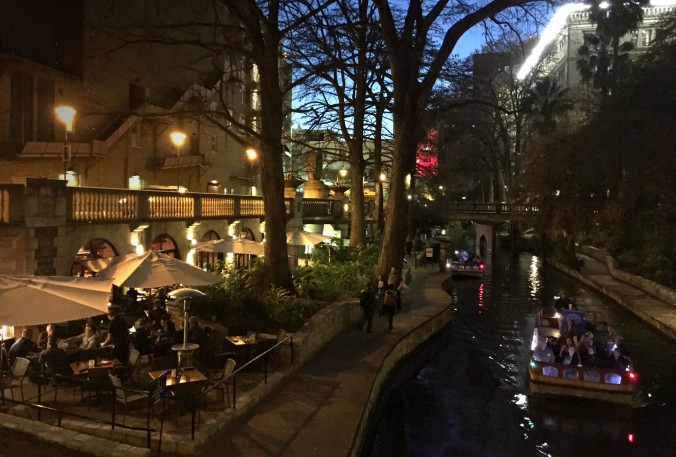 One-story below downtown San Antonio is a 2.5 mile stone pathway winding its way along a lush and fragrant walkway. Two parallel walkways along the Paseo del Rio wind and loop through downtown.

Instead, after walking the picturesque stone paths, I was impressed by the city’s historic centerpiece, the San Antonio River Walk. It is a prime example of the quintessential American recipe for development.

We are freightcationing in the southern US states this winter.  My instructions to MacGyver: we go to the snow zone ONLY if the money is right. 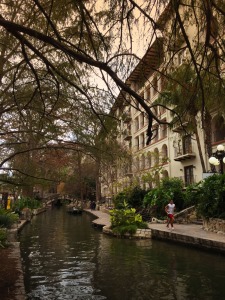 Almost around the clock, San Antonioans enjoy the walkway. There are no hand rails along much of the River Walk. We wondered if there’s a yearly statistic of how many people are fished from the water.

Our traditional overseas, beach-filled, winter holiday was abandoned this year for three reasons. First, slow freight — really it sucked  last year.  Our gross revenue was off 26% from 2014. Second, we spent almost $35,000 on repairs and upgrades to our tractor and trailer. Black Beauty has nine years and 949,000 miles on her, making her 63 in people years. Even a healthy, happy 63-year-old has issues and needs improvements. MicroBlue bearings and new tires have considerably improved fuel mileage for our Conestoga trailer. And third, we bought a BMW motorcycle last year.  It was simply not a smart move to take more savings for a winter holiday in another uncertain freight year.

The 2016 Roads Less Traveled Tour starts in Texas, the deep south of Texas.

When we started driving eight years ago for Schneider National, a typical dispatch was New Jersey to Texas, traveling south on 1-35 through San Antonio to Laredo with never an opportunity to stop and visit.

Restaurants and hotels, many in restored buildings from the mid 1800s, including the Omni La Mansion del Rio, line the walkway. There is music, beautiful lighting and candles.

This is a central issue of the 2016 presidential election campaign. What is the best use of taxpayer’s money in developing America for Americans? Is it the billions of tax dollars given to corporations in tax forgiveness and business subsidies, or is it money spent to make college tuition free or replace our crumbling infrastructure.

In the past 30 years government has been vilified in a well-financed campaign. The recently released Dark Money: The Hidden History of the Billionaires Behind the Rise of the Radical Right by Jane Mayer documents the Koch Brothers’ funded infiltration of American democracy to buy and control government for their own profit. Now we have Bernie Sanders who wants America’s great wealth to provide benefits for the working- and middle-class. 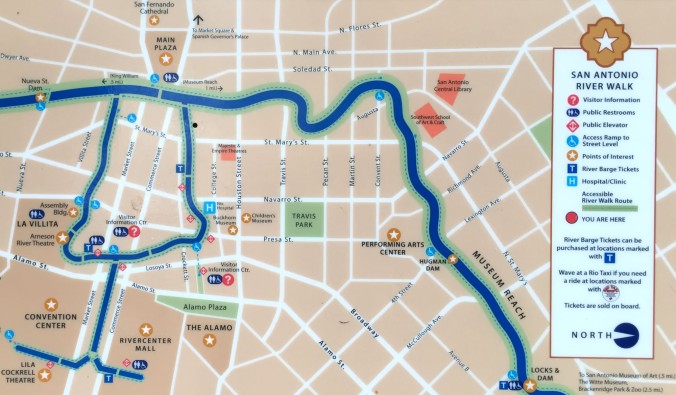 We didn’t appreciate the drama behind the struggle and innovation that created the River Walk until we found this map. The San Antonio River naturally flows in the horseshoe shape on the left. The thicker blue line across the top is the bypass which was built to control the flow of the river to minimize, even prevent flooding.

This is how government, taxpayer and business came together in San Antonio where the San Antonio River has a horseshoe bend through downtown surrounding a flood plain. The river was prone to overflowing its banks. The worry was documented as early as 1902. Investigations started but nothing was decided. In 1921, 50 people died in a flood. Among the solutions was a simple, but not pretty idea of building an upstream dam and a paved sewer. Thankfully the San Antonio Conservation Society delayed the plan,  allowing time for architect Robert Hugman to visualize the river walk. City leaders eventually came around to the idea, and the former mayor Jack White, in 1938, was instrumental in passing a bond issue to finance the plan. Residents were so fearful of future flooding that Hugman opened his office on the river at the bend to prove it was safe. His plan completed the earlier proposed bypass channel and added two gates and a small dam to control the river flow allowing commercial development around the bend of the river.

Tables along the San Antonio River Walk set for lunch. This eating area is below a bridge carrying traffic through the downtown. The River Walk has a charming, frozen-in-time atmosphere. It is the centerpiece of yearly San Antonio festivals including Fiesta San Antonio when flowery floats drift along the river.

The 2.5 kilometer river walk has 20 bridges, some steel, creating desirable sitting nooks, others stone, paid for by the Depression-era WPA or Work Projects Administration of the Roosevelt government. It has been expanded with the additions of shopping of malls and hotels. Yes, there are some chain restaurants but many are not. We wanted to eat at the acclaimed Luke’s, but on a Tuesday night at 5:30 there was a one-and-a-half hour wait for a table. We headed to Acenar for Mexican food, which has a patio overlooking the river walk under a canopy of trees. Along the walk is The Briscoe Western Art Museum, an art deco design reminiscent of Manhattan’s Rockefeller Center, with an excellent model of the final battle at the Alamo in 1836 graphically showing the outnumbered Texans against the troops of Mexican General Santa Anna.

Now that the bend is connected by a bypass channel, there’s a circle boat tour.

Fudge and tourists go together like hands and gloves in America. Everywhere. Who eats all the fudge sold at tourist stops coast-to-coast-to-coast? Yes, the Alamo in San Antonio, Tex., sells fudge.

Next stop, the Alamo, where we found the ubiquitous fudge shop for tourists.

This year is the 180th anniversary of the 13-day siege at the Battle of the Alamo — also a Leap Year —  we joined the guided tour of the World Heritage Site. The Alamo was established in 1724 as a Spanish mission to convert the natives to Catholicism. The guided tour is well worth the $15 per person to understand the scale of the battle field.

Both San Antonio and Texas are examples of good things that happen from public investment. Nine years after the massacre at the Alamo, and despite heavy opposition,  the US government invested resources and Texas became a state in 1845. 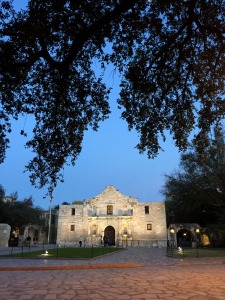 Emily Morgan Hotel by DoubleTree overlooking the Alamo, upgraded king-room on the top floor with Hilton Diamond status. Tuesday night rate with breakfast, $168 with taxes. Park your vehicle two blocks away at a city-owned lot for $9 a day.

Dinner along the River Walk at Acenar. Poquito Por Dos, $42, called fajitas in most places. Sizzling, juicy, picante beef, pork, chicken and prawns. I would have welcomed more vegetables.

Eating beef is a must in Texas, but our vegetarian lunch in the Pearl Brewery district at Green Vegetarian Cuisine was delicious. The Mediterranean Bowl featuring crunchy, tender falafel and pecan humus was $11 and the four-inch tall vegetarian Big Nasty Burger was $12.

Guided group tour of the Alamo, $15 per person .

While we enjoyed the free Tuesday night at The Briscoe Western Art Museum, the entrance fee is $10.

11 thoughts on “Hiding from Winter in Southern Texas”