The shuddering woke me.

Sleeping in the truck is like living next to railroad tracks, the first two weeks is hell, then you hear nothing. It s the change in engine noise that alerts us to trouble.

Go back to sleep. It s okay, my husband waved me back behind the curtain.

He was accelerating on the ramp out of Atlanta when the transmission stuck at ninth gear. The computer pushed the engine s RPMs up, it started to shift to ten and failed, jumping back. The truck was doing its own version of the jig – nine, ten, nine, ten – engine racing, straining, stopping, shuddering and back down to nine. He coaxed the transmission for about ten minutes, finally he stopped, turned the engine off and started it again. This time he slowly accelerated to 13th gear.

We’ve been having little transmission problems since we purchased the truck. It s an ultrashift, no clutch, no stick, ruled by a computer, which shifts gears at the exact RPM. It s the technology version of what super truckers do – float gears – long time truckers rarely use the clutch, familiar with the sound of the perfect RPM they shift when they hear it.

Last December departing Orlando for Newark, the transmission refused to go above 11th gear, driving 1,075 miles at 52 miles an hour was a scary option. McGyver thought, it s a computer. What do we do when our Macs give us trouble? We shut it all down, we wait a few minutes, let the computer do its internal thing and then restart. We did this three times in a hour and magically, the truck healed itself and we headed up I-95 in 13th gear, the problem fading in our memories.

We have been religious about shutting off the truck properly, in neutral, about letting it cycle through all the gauges twice before putting the truck in gear. For the most part, this seemed to work. The truck has a little trouble shifting from second to third while bobtailing, but we thought it was because we have no weight on. Sometimes it clunked in the downshift at sixth gear and it got a little stuck at ninth, but the shutting down and restarting seemed to work.

We were fooling ourselves.

Monday morning out of Atlanta, the cat and mouse game with the Eaton transmission ended. Twice he pulled over to turn off and restart the engine. Once, when he slowed for traffic the transmission started the nine-to-ten dance. We switched drivers in Monroeville, Alabama. The dance began again as I accelerated down the entrance ramp to I-65. Nine-ten-nine-ten, I took my foot off the fuel, I jammed it on the throttle, no fuel, full fuel, finally we coaxed it above tenth gear.

McGyver decided maybe we picked up some bad fuel in Columbus – it s going around, algae in the fuel. When I slowed the truck on the next exit ramp, at eighth gear the transmission clunked and for an instant the truck seemed to stop dead. Now I was scared.

We changed the fuel filter – we carry spares for all the filters, the belts, grommets for the air lines, we re preparing for a life at sea where there are no floating boat stores – checked to see if we could see anything leaking from the transmission, nothing, we headed out. This time the truck only shuddered slightly from nine-to-ten then broke through to the cruising gears.

There is a TA truck stop at Slidell, Louisiana, three hours away we decided I would not stop again until we reached it and we would have them check the transmission fluids. Ten miles from Slidell, my Pre-Pass transponder beeped red at the Mississippi-Louisiana crossing. DAMN. I have to go in for reweigh, requiring another stop, start and acceleration.

I crept across the scale, knowing our weight was fine, but worried about the acceleration away from the DOT inspectors. I pressed the throttle gently and, of course, the transmission began shuddering between second and third gear. Nice! Draw attention to ourselves and get a full level three DOT inspection, I thought.

The on-dash computer showed 31 code faults in the transmission. Something is up. When we dropped our load we headed to Crescent Trucks the home of the local Volvo-certified mechanics.

Transmissions are thousands of dollars to repair. We can be charged thousands to have the thing taken apart and they find nothing. They can replace parts but nothing is fixed. We love the ultrashift, the freedom from shifting, but this is the ugly side.

To add insult to injury, Crescent Trucks waiting room is atrocious, they refused to let McGyver sleep in the truck while it was in the shop – insurance. At TEC Portland where we usually get our truck work done, the driver s lounge has a shower, laundry, big screen TV, several Easy Boy type recliners. They know truckers live in their trucks, if they are not driving, they need to be sleeping. This was worse than a doctor s waiting room – it did have cable on the 22 inch tube tv and the others in the waiting room were watching Bonanza reruns, not Fox News a small blessing.

The other issue weighing on us, just last Friday in California, three days ago, McGyver booked our winter holidays. Ten days – nonrefundable – in Buenos Aires, Argentina where he promised to take a tango lesson with me and a points ticket flight to Bangkok, Thailand in February. Shades of January 2010, when two days after we booked our holiday to Australia, the truck came down with a $5,000 unexpected repair, new gaskets and a cooling system overhaul. In the end, we paid for it all.

To up the tension a little more, a message from the Fleet Manager. Usually that means they are questioning running time and we are always a little late because we refuse to drive like our pants are on fire at their blended speed choosing 62 mph. Arrghhh! Me, always the worrier, jumping to conclusions, was thinking this is it, we are being turfed. I sat in the waiting room dividing up our Emergency Fund to pay outstanding bills.

Turns out she wanted to know why we left three hours late with our last load. Dispatch sprung an early load on us when I had told them I needed time to reprovision – another Murphy s Law, truck troubles only happen when we ve spent at least $100 on food. They said ok, she said ok. One problem gone, except the food is still sitting in the truck.

With only three hours sleep, McGyver is sitting in the plastic upright chairs in the waiting room, leaning forward, head in his hands, I m sure thinking this is all your fault. I could be in New York.

He took the load because he hoped we could go into New Orleans for a few hours since we d never been there. I don t think he meant like this.

Finally, after five hours waiting, a golden full moon rising over the dealership, the verdict came in.

While the mechanic found nothing, the transmission maker had a Service Bulletin on our transmission model for the exact codes that our truck’s computer had thrown. Eaton told the shop that they will cover either the basic repair kit for some bushing and housing????? or the full replacement depending on what is needed when the transmission is disassembled.

A warranty repair on a second hand truck! How freaking phenomenal is that. We were shocked, McGyver asked at least four times, so let me get this straight, when they open it up, Eaton won t say, oops, tough luck, it s not our problem.

No, they assured us, Eaton said they were going to replace one part or all the parts and they would pay. We had a 500,000 mile or five year warranty. These codes were a recall issue. We don t even have to pay the $99 diagnostic fee.

Can you say relief? Warmth flooded my body like I d peed myself. We were giddy.

But. Oh great, always a but. But we can t get it done until Wednesday afternoon we have to disassemble the transmission and then order the parts.

We ve never been here before and we need one more night in a Hilton property to retain our Diamond VIP Status for 2011.

I saw a Hampton Inn on our way over here, I said.

That s expensive, said the Service Manager. We recommend the Super 8, we get you a deal for $52.99 a night.

He didn’t know that we re Gentleman Truckers.

McGyver flipped open the iPad. The Hampton Inn (a Hilton property) was $99 plus tax, but the Hilton downtown New Orleans on the edge of the French Quarter was $96.84 a night INCLUDING tax. 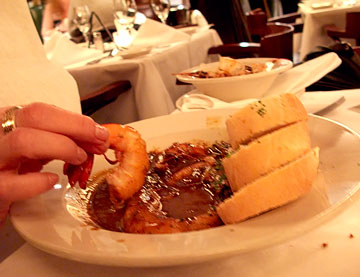 And one more hour later, our city selves, scrubbed clean, walked out the front door into a brisk 55 degree temperature and down the brightly lit streets – the eve of the Winter Solstice, the beginning of longer driving days, a coincidence not lost on me – to Mr. B’s Bistro at the corner of Royal and Iberville, an historic dining corner, recommended by the Service Manager.

We sampled the gumbos and the seafood appetizers. I tucked into one of my favorite meals, complete, head-on, jumbo prawns, dripping in a rich, creamy barbecue sauce and natural juices. 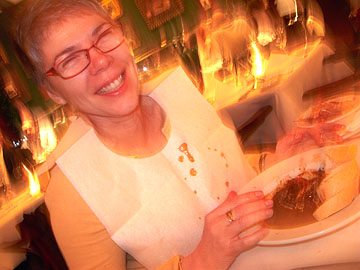 Good thing I had the bib!

You know you have to peel the prawns, the waiter asked as he prepared to drape me with a paper bib.

That s the best part for her, McGyver answered. Maybe you should bring two or three of those (bibs).

He ordered the Steak au Poivre, perfectly cooked between rare and medium rare, with a creamy, spicy pepper sauce.

Welcome to the Team Expedite Christmas Party, he said.

4 thoughts on “Making The Most of a Bad Situation”