The perfect capitalist solution, some would say, about our medical care plan.

We are letting the market decide where and how we spend our medical care dollars. We landed in Thailand Thursday for our annual Body Works Tour where a side benefit of the affordable medical checkups is making a political and economic statement.

We know that one of the reasons that medical care is inexpensive here is wages. The doctor’s fee for a half hour consultation with a specialist last year was $45. In 2006, MacGyver was bit by a fire ant, in a very painful place, under his arm, in Bali. On the return trip to Bangkok we visited Bumrungrad, our Bangkok medical facility, to see a specialist, a doctor who had worked at New York Presbyterian Hospital and Philadelphia General. His fee $15.

The Thai doctors, many of whom have practiced in the US, admit their salaries are lower, but they say they are happier because they practice medicine, they do not spend their days dealing with insurance companies and churning patients to maximize income. And prices have increased in the past six years.

As the economy continues to de-leverage, the next step beyond squeezing working, middle-class and small business incomes and standards of living is to take a whack at the upper classes, the professional classes, doctors and dentists among them. They can’t keep their income if we can’t afford to pay. We are spending considerable medical care dollars in Asia, at least $3,000 a year. The idea is spreading.

A full-service, US-based sick care plan for us, because we are small business owners is about a $1,000 a month. Many truck drivers have no medical insurance. Instead, we pay $308.44 to Humana — two years ago, the plan was $249, it has increased 18 per cent each year for two years when there is supposedly no inflation, except in the profits generated by medical insurance, pharmaceutical and medical device companies and the salaries paid to their executives — for an astronomical $10,400 deductible, catastrophe plan. Get hit by a bus, we THINK/HOPE we’re covered. Need a mole removed, go to Thailand. The difference of $700 a month pays for a lot of medical care in Asia plus one bang up vacation that includes a massage every other day.

Last week in Oregon, the business owner who sold us MacGyver’s titanium Vespa asked us where we were headed next. “Bangkok,” I said.

“Are you going to a dentist?” he asked. That he immediately recognized Bangkok as a destination for medical reasons surprised me.

“No, no dentist yet. I am happy with mine in New York. He accepts a DenteMax discount program, which helped considerably with the price of two crowns in December,” I told him. The February issue of the Delta Sky magazine, which I read enroute, had a large section on outside-of-America-medical-touristm information and advertising. Costa Rica, according to this, is an excellent place for dental work, 50-to-70 percent less than in the United States.

In Thailand we have access to better care than we can afford in the US and we get more for our money. But without a family doctor, we are acting as our own General Health Contractor, relying on our own research and instinct to determine what care we need and when. The only family doctor we have had in the past 12 years is the doctor in Bangkok who has now seen us four times.

While I can read and research, I don’t have a medical degree. I am concerned about hiring sub-trades — specialists, consultants, the various “ologists” — doctors, optometrists, dentists, periodontists, endocrinologists, urologists, dermatologists etc., screening them, trusting them, ensuring good care.

Bumrungrad has several health screening packages ($US1=TB30.85). We are here for the basic, blood tests to check cholesterol, thyroid, but our focus is new glasses and to see my chiropractor, who I discovered last year.

My discomfort started several years ago with a kink in my neck, a sore back at times, I noticed my hip was sometimes painful and uncomfortable, I thought I needed to stretch more. US and Canadian chiropractors have kept me going, one in New York, Florida and British Columbia, but I still felt the true problem, whatever it was, was not yet being addressed.  I wanted another opinion.

The treatment rooms at Dr. Mark Leoni’s office, an American practicing in Bangkok, are lined with the most interesting “wallpaper” I’ve ever seen. Posters featuring Travell and Simons diagrams of pain zones and how pain is connected through trigger points.

Examining the posters between treatments, I could see my pain and muscle spasms and how they are connected. Why my upper foot next to my ankle occasionally cramps. Instantly, my aches, pains and stiffness made sense.

My husband describes me as “tightly wound,” but over the years, we get out of whack, sore here, sore there, bad sleep, poor posture, twisted-back-while-picking-up-the-phone and other ridiculous aging problems that we largely ignore, but suddenly add up.

Poof, we’re stooping like old women. A friend had been telling me for three years to “stand up straight.” She was right, I had a problem, the muscles tightened, preventing me from standing up straight.

Dr. Mark’s treatments were four-in-one and after four last year, I walked out the door standing straighter than I have in some time. He cautioned me it’s only the beginning of a lot of work. Work which is now my responsibility.

My nerves have gotten used to wrong positions, he explained, they must be retrained. He used trigger points, acupressure, ultrasound and lasers — which have been used for many years in Europe and Asia, but only recently in the US — heat packs and a vibrating machine on the soles of my feet, my calves and thighs and lower back, plus traditional chiropractic adjustment to loosen the tension in my neck, lower back, hips and calves. His treatments, running an hour to an hour-and-a-half are the same price as a 15 minute adjustment in New York.

He recommended Glucosomine Sulphate powder, without condritin, which helps rebuild collagen and cartilage and a stretch to build up my muscles mid-back and a lumbar pillow for driving to encourage the S curve in my spine. I’m to avoid activities that stretch my spine into a C curve, such as touching my toes. I have a six-inch diameter lumbar roll to loosen the tight gluteal muscles and a half roll to work on my balance and build up my core muscles. I need to walk every chance I get, five minutes, ten minutes, if that’s all the time I have.

A year later, still feeling remarkably well, and I think helped by the BoseRide driver’s seat, which eliminates road vibration, I have returned for more. 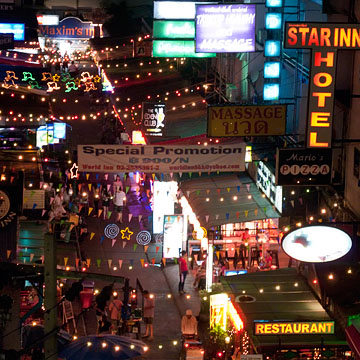 My second stop was Tarntip, my “local” salon, run by a woman business owner, her brother studied in Vancouver and her family owns a sugar plantation. I imagine that she is the family financial powerhouse. I met her in 2005 because the Bumrungrad shuttle drops patients at the NaNa Skytrain stop at her Soi (alleyway). While eating lunch, I saw her sign.

The spa is on Sukhimvit Soi 7/1 tucked in among the girlie bars and restaurants. Since I always visit in the afternoon when it’s quiet, I didn’t realize until last year how many noisy bars dot the Soi. Five years ago it was a headsplitting fuschia and lime, today toned down to light green and gold.

A pedicure, manicure and one hour foot massage with tip is $17. The women use Thai massage principles, combining acupressure points, yoga, years of practice, experience, trial and error and suggestions from Western clients. They cast a spell in eucalyptus, under the blinding fluorescent lighting, nimble fingers kneading my toes, feet and lower legs, chatting with each other, their voices a murmur, the sound of flowers rustling.

I drift off to sleep.